2/2/2022 – Removal from a water meter on Frank Whiteman Blvd. Comb was removed and mounted on frames and bees were beevaced.

2/11/2022 – Removal from a water meter on Pinehurst Circle. Comb was removed and mounted on frames and bees were beevaced.

3/16/2022 – Small removal from a wall in a horse stall located on Rose Apple Lane. Comb was removed and mounted on frames and bees were beevaced.

3/21/2022 – A good size swarm was beevaced off the front of an empty box in a Marco Island apiary. The queen was spotted and caged. The swarm was transported to our Naples apiary and set up in a brood box. The queen was released after 48 hours and it was seen that the bees had already built a large piece of comb.

3/30/2022 – A small hive was removed from a water meter on Delmar Terrace in Naples. The queen was caged.

4/15/2022 – Small hive was removed from a Kent Drive address in Naples. The queen was spotted and caged. 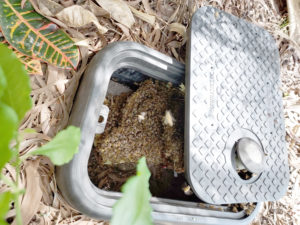 4/30/2022 – Hive was in an old traffic cone at a house on Fairway Circle in Naples. The traffic cone with bees was netted and then transferred to the apiary for later removal in to a hive box.

5/10/2022 – A medium size hive was removed from a roof overhang on a house at Hidden Harbour Drive in Naples. The queen was caught.

5/24/2022 – A small hive was removed from a Thomas Jefferson Court, Naples, water meter.  The queen was captured.  This is another colony that established itself in the same water meter as the removal #188 above.

5/25/2022 – A picture of a garage wall swarm box upside down lid near the NaplesBees apiary. The picture is of the built comb after just 3 weeks from when they first moved in. Five large comb pieces were removed from the top board and rubber banded in to frames.

5/29/2022 – A first at the NaplesBees apiary…… Several tall format swarm traps that were constructed and hung around the apiary back in 2020 have been totally ignored until just a few days ago.  The boxes consist of 5 brood size frames that have a large space beneath the hanging frames.  The idea is that the nuc box should be more attractive to scout bees because of the internal space.  Details on these boxes are on the Gear page.  Update 6/7/2022: A look inside showed that comb is being built on several frames.

6/1/2022 – A medium size swarm was removed from the side wall of a commercial building on Mercantile Avenue.  As the swarm was being vacuumed up, the queen was spotted, but before it could be clipped, she took flight and apparently did not return.  After finishing vacuuming up the bees, a small ball of bees was observed in a nearby tree branch, which I believed to be the swarm’s queen.  That small ball of bees was vacuumed up in to the original swarm’s container.  Update 6/7/2022: It was confirmed that the hive box does have a nice looking queen and they are building comb!!

6/1/2022 – A small swarm settled on the opening of one of the garage high wall mounted swarm traps.  Update as of 6/9/2022: It looks like the bees have taken up residence in the hive box and will be making it their new home.

6/2/2022 – A medium size hive was removed from a water meter on Exchange/Airport Road. Unfortunately, the owner had removed the water meter top and dropped it on the ground, crushing the comb and trapping/killing a lot of bees. Some comb was salvaged and mounted in frames and the bees were vacuumed up. The survival of the hive may be in doubt because of all the damage to the hive’s comb.

6/21/2022 – Two bird house boxes that bees had taken over were removed from trees at a Coach House Lane location in Naples.  On site removal was simple with just detaching the bird houses from the trees and placing them in a stacked empty brood/super box with a screened lid placed on the top.  Later, at the apiary, the bird house box can be taken apart, comb cut out, and all bees/comb placed in the normal frame filled brood box.

7/12/2022 – A small hive was removed from a water meter on 108th Ave North in North Naples.  Unfortunately it was overrun with wax moth larva and was not able to be saved.

7/12/2022 – A large clay pot was removed from the backyard of a house on Pompei Lane in Naples. The entire pot, with bees, was placed in a double box and transported to an apiary for putting the comb and bees in a brood box.

8/2/2022 – A medium size swarm was removed from a pepper tree branch and placed in a brood box that was positioned near the branch. It will eventually be moved to a BB&G fellow beekeeper’s apiary once it is confirmed that the bees are building a hive.

8/5/2022 – A small hive was removed from a palm tree branch located on Coronado Way, Naples and placed in a brood box. There were several pieces of comb that were rubber band mounted on a frame. The hive was then placed in a local BB&G beekeeper’s apiary.

8/17/2022 – A large swarm settled on an apiary jester nuc box. The box was carefully moved to a nearby empty brood box and all the bees were dumped into the brood box. It was obvious that such a large swarm would not be able to fit in to a 5 frame jester nuc, so the decision was made to get the bees quickly acclimated to a larger brood box and get them to stay. A week later the bees seem to be staying and setting up a permanent hive.

8/23/2022 – A very large hive was removed from a large water meter box on Mooring Line Drive in Naples.  The box was completely built out and contained lots of brood and over 20 pounds of honey.  The hive was taken to a BB&G apiary.

8/26/2022 – A small swarm that landed on the ground near the apiary was coaxed to go in to a nuc box. It took about 45 minutes for the bees to all move because the queen kept going in to the nuc and then coming out for about 4 times before staying inside. A one frame sugar water feeder was placed inside. Eventually the nuc will go to a BB&G apiary.

11/10/2022 – A small swarm that landed on a tree trunk near the apiary was removed to a nuc.  The queen was spotted and caged.  If they decide to stay and develop in to a good hive, it will find a good home in a BB&G apiary.

The productive bees in our hobby apiary produce more pure, raw, honey than we can personally use, so we offer our surplus for others to enjoy. We bottle in one pound squeeze bottles with a convenient drip proof top that allows easy and precise dispensing.
You can buy the commercially processed stuff mostly made of questionable honey originating from China, India, Vietnam, etc,  but it can’t compare to this local fresh pure natural honey made by our NaplesBees apiary bees in Naples, Florida. Get OUR HONEY HERE.