Bee removal highlights for 2016 and earlier

Saturday, October 31,2015, we happened to notice a ball of bees on the back top edge of one of our larger hives. It was a swarm. So we quickly set up a new hive box with frames and sugar syrup in order to see if we could catch it……

11/21/2015 – We took a look at the hive this morning and were disappointed. The hive is basically abandoned and the remaining comb is becoming contaminated with wax moths. There was no sign of any queen and there were only a few bees present. I don’t think we ever got the queen. This and other failures prompted us to finally complete our bee vac design so that we may have better success at getting the queen.

11/17/2015 – We got an email from John in Marco Island concerning a couple hives in a tree on the side of his house. We took a look at the situation and were able to remove one of the hives. I must say they were some of the most gentle bees I have ever experienced.

It is too soon to tell how well the transplanted bees will do, so stay tuned. When the hive entrance was opened at the NaplesBees apiary location, the bees seemed to want to stay around, which is always a good sign ! 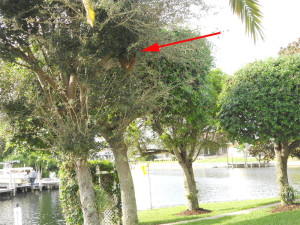 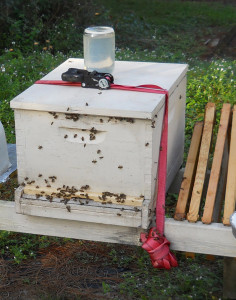 3/18/2016– Another hive was removed from a shed located in the back yard of a house in north Naples. Everything went smoothly, with the bee vac scooping up a small hive with around 10,000 bees. We’ll let them get settled down in their new home and open up the box in the next day or so to see how they are doing.

3/30/2016– We went to a house in Naples today and removed a fairly large hive that had taken up residence in a house roof overhang. Access was not easy and the comb extended back up the truss. After a night to settle down, the bees were transferred to the apiary.

4/13/2016– We got a call to remove a small swarm in a water valve box next to the street in the Lake Park area. It was a very small swarm with only around a thousand bees. A small queen cup was seen but got damaged in the comb removal, so we will probably just combine this hive with another small one we currently have in the apiary.

6/5/2016 – We were asked to remove bees from a concrete block wall in Lakewood. The process involved gradually breaking into the blocks and opening up the hive in order to remove the long combs of brood. As can be imagined, breaking the block with a hammer did not make for happy bees. We vacuumed up the bees as the blocks were broken up and eventually got 15-20 thousand bees. Unfortunately our camera pictures of the process failed. The hive was placed in our apiary.

7/8/2016 – We removed an absolutely packed hive located in a ground water meter box. Comb completely filled the available space. We found and captured a large queen, vacuumed up the bees, and mounted the cut out comb into frames.

7/13/2016 – We removed a small and very calm hive from a palm tree located at a house on Forest Hills blvd. We opted to simply cut the branch and place in a box for transport. We’ll relocate the comb into a frame before putting in the apiary.

7/24/2016 – We removed a very large hive located on the side of a house in Bonita Springs. The hive consisted of over a dozen large combs covered in bees….. probably 25,000 bees at least. It took 3 hours to vacuum the bees and put most of the brood comb into brood box frames.

7/27/2016 – We removed a another large hive located underneath a mobile home. The comb ran from the edge of the home inward about 8 feet, filling up the space between two floor joists. Click on any of the pictures for a larger view.

8/25/2016 update – The hive had no queen and no chance of making one, so it was combined with another small hive in our apiary using the newspaper divider technique.

8/26/2016 – We removed a small hive from a water meter at a house in Royal Harbour. The water meter box was full of comb and after carefully removing each comb, the queen was found and captured. The bees appeared to be very gentle. We’ll give it a week or so in the apiary and then see how the queen is doing.

9/3/2016 – We removed a small hive from a house window alcove in Grey Oaks. The hive consisted of gentle bees and about 5 small combs, mostly of brood. The comb was removed and placed in brood frames and will be placed in the apiary. Unfortunately we did not spot the queen, but that doesn’t mean we didn’t get her as the beevac might have picked her up. We’ll give it a week or so in the apiary and then check the queen status.

9/14/2016 update: We took a look at the hive today and spotted a good queen. We removed all of the comb support mesh wire from the frames as they had mostly welded the comb to the frames.

9/14/2016 – We removed a small hive of gentle bees from a water meter located in North Naples Boca Avenue area. We found the queen in what seems to be a usual spot, which is on the bottom of the water meter lid under a screwed down plate. Removing the screws reveals a good size hiding place that the queens and many bees always seem to like to hide in.

9/17/2016 – We removed a good size hive that had established itself inside a dilapidated water fountain at the rear of a house in north Naples. The entire column below the water basin was filled with comb.

10/12/2016 – We removed an 8 large combs size hive under the overhang of a roof. The bees were very calm and not aggressive at all. In fact it is one of the few times in a removal that I did not observe a single bee even attempting to sting. I never spotted the queen but saw several hatched open queen cups.

11/2/2016 – We removed some large combs on a hive under the overhang of a house roof located in the Orchards gated community. The bees were very calm and will make a good addition to our apiary. Unfortunately, we never spotted the queen, but I have to believe we vacuumed her up as there were virtually no bees left when we got done. It was probably a fairly young hive but I estimate there were 15K-20K bees. Notice the bright yellow comb, a sure indication that the hive is fairly young. Click on any picture for a larger view.

UPDATE: 11/5/2016 – After we had removed the bees as described above, we relocated the bees to a hive box in our apiary. Unfortunately, today it was noticed the bees had completely left the hive box for parts unknown. Even though all their comb was mounted in frames in the hive box, from the standpoint of the bees, sometimes things are just not right and they decided to abandon their brood and honey comb and move on. Such is the “art of beekeeping” !!!

11/11/2016 – A medium size hive was removed from a water meter box located in the Crossings subdivision in Naples. The removal went well and they were very gentle bees, but something a little unusual happened when we started removing the combs and mounting them in hive box frames. After about 15 minutes, word must have got out because a cloud of thousands of bees descended on our location trying to rob the honey in the combs. It was amazing to be in the center of the activity, but it was a clear indication that there was at least one hungry hive somewhere nearby.

12/2/2016 – A medium size hive was removed from a cabinet in an outdoor kitchen behind a house in Golden Gate. The bees were very gentle, and we cut all the comb out and placed in frames. We never saw a queen as we vacuumed up the bees.